The memory chip attached to the Priory Aenigma game board is a Winbond W25X10CL SPI flash storage device. I went with a common device that had a serial number which is easy to read under magnification. It's similar to a USB thumbdrive or an SD card in that it's just storage media. I went with this kind of device for a few reasons, but mainly because I didn't think I'd have a lot of luck wandering around DEFCON handing out free USB sticks. Also, the first design of PA was a spiderweb (inline with my Tektite project), and the chip (in this form factor) looks a bit like a tiny bug.

To get started, you will need to extract the contents of the chip's memory. That means you will need a device capable of interfacing with it. There are many options, but the most accessable is probably the CH341A programmer with an SOIC-8 clip. In addition to the hardware, you'll need software for it as well. All of the Priory Aenigma badges were programmed with a CH341A and this tool. 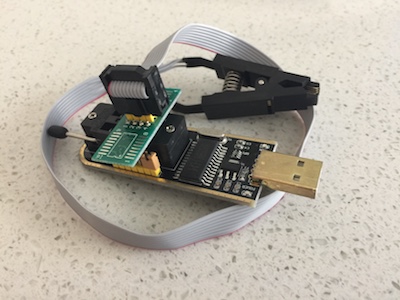 Be careful about the orientation when attaching the clip or your test probes. Pin 1 is marked on the chip with a small dot. Most the Priory Anigma game boards are hardware write protected. A few have a broken trace on the back because I accidentally enabled the write protect before programming them. If the back of your board doesn't have any scratch marks, you will not be able to accidentally erase it without trying really hard.

Take a look at the file with a hex viewer (a graphical one is probably best). In particular, look at the first ~1Kb of the file. You should see printable ASCII characters (an ordinary text file) that contain the first puzzle.